This rapid pace novel Robert Sable Mystery is being queried:

Once again Tlingit Alaska State Trooper Sergeant Robert Sable has been pulled from his honeymoon.  This time his wife’s godfather, Red Bennett, a prospector, has been murdered.  Fishermen found Bennett’s body near the railroad tracks south of . And Sable and his long time partner Aaron McCabe head to the crime scene to do their own investigation.  Near the Bennett's outline, they find a note and safety deposit key.  Sable and his partner locate the miner’s back trail and follow it to his mining cabin where they find the miner’s friends slumped over a table, their heads laying in pools of blood. While investigating the scene, Sable finds hidden under the base of the prospector’s fireplace several hundred thousand dollars in gold nuggets the killers missed.
As Sable digs further, he hears rumors Bennett had found the Alaska Dutchman, a mine of myth and legend. Over the last hundred years, men have search and died trying to find it with little success. If they found it, the curse would kill them and the mine would be lost again.
Sable follows the clues and find someone is extorting or killing miner for their claims in the 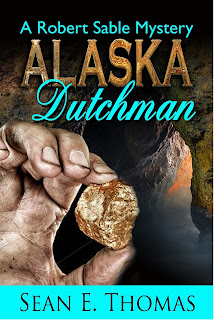 .  Rumors indicate a dead man, Phillip Frost, is behind the operation.  A man Sable and his partner killed on another case.  When Sable gets close to the real architect, the man sends several assassins after his and his partner's family.  These attacks not only drive a wedge in Sable's marriage, but Sable is forced to secret his wife away as the attacks keep coming.  He and his team realize they must find the gold mine and find a way to stop the mastermind behind the plot.  But the safety deposit key leads to only more cryptic clues and one part of a map.  Now, Sable and his team must find the rest of the puzzle and put it together before criminals find the mine.
Posted by Sean E Thomas at 7:30 PM 0 comments