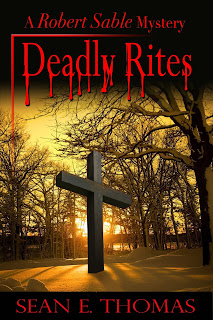 As Sergeant Sable starts his investigation, he finds similar murders occurred across the lower 48 states, the killer apparently working his way toward .  A number of priests blamed for similar crimes at their churches are on death row.  The troopers begin their investigation by questioning church staff and parishioners, and getting a sketch of the missing priest.  Sable’s team checks numerous databases to see if they can pin down a suspect.  Realizing the Avenger is somewhere in the state’s system of church schools or churches, Sable’s team decides to go undercover to catch the killer.  With the killings still happening, Sable must sift out the clues, find and stop the killer.
Posted by Sean E Thomas at 2:12 PM